The Unvarnished Truth | by Royce Ryton

Tom and Annabel are a reasonably happy married couple. One evening they have an argument as to who loves the other more. A rough-and-tumble ensues and Tom discovers to his horror that Annabel has been killed by a flung beanbag chair. In his panic he phones the police as well as his literary agent, Bill. The policeman who appears shortly after turns out to be Tom’s old friend, Bert. Bert assures Tom that no one will believe such a ridiculous murder and Tom will be put away for sure. Tom’s mother-in-law, Mrs. Cartwright, knocks which results in Bert and Tom stashing Annabel’s body in the bathroom. Bert tries to distract Mrs. Cartwright with a funny story but this only results in her laughing herself into a heart attack! This sets the play up for a comedy of events!

“I’d been toying with the idea of directing a play for the first time at CTW for a while but had been procrastinating!  So this year I started reading excerpts of scripts online.  The genre I was going for was comedy and death!  I don’t take myself too seriously so it seemed a natural choice, and I will enjoy the challenge of getting belly laughs from the audience.

The Unvarnished Truth was one of two plays I shortlisted in my mind; it’s funny, silly-funny in fact; it was first put on in 1978 (I’m a 70’s born); two of the characters were originally played by Tim Brooke-Taylor and Graeme Garden (so it has to be funny, right?) and Royce Ryton, the playwright had red hair (same as me!).  This play should appeal to a wide spectrum.”

First opening in 1978 in the West End this play still has a distinctive 1970s feel to it, not just with respect to the set and costumes but also with respect to the style of the dialogue. I loved the iconic nods to the 1970s that included a typewriter, a Trim-phone, a Sparklets soda siphon, the fad for crocheted throws and of course, the shirts with large collars and unspeakably awful tank tops. I also liked the fact that middle class people, even in extremis (and having 4 dead bodies in your living room would try most people’s sanity) did not swear in the 1970s. Perhaps it was the action, more than the set and props, which actually rooted this play in its era, since the self-imposed language constraint meant that emotional outbursts could only manifest themselves physically. Apart from the initial fight between Tom and Annabel this physicality was most obvious in Bill, who seemed to fly around the room in his all-consuming despair, while Bert, in great contrast, was more solid in his attempts to find a solution to the problem of multiple murder. The movement of the bodies, to and from the lavatory, and the vindictive soaking of The Inspector et al by a revived Annabel, were other examples of physical activity in a play that relied heavily on its visual rather than verbal appeal to make it funny. 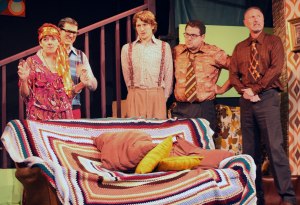 But funny it was, not belly-achingly perhaps but steadily risible with multiple outbursts of laughter. The characterisation helped enormously, with the fantasising playwright Tom, well played by Jack Shepherd, contrasting beautifully with the down to earth practicality of Bert (John Mabey). The latter was a dead ringer for Mel Smith in his heyday and captured the spirit of solidity and reliability that you would expect of a policeman trying to cover up the murder of a friend’s wife! Bruce Thomson’s Bill was different again, combining a selfish streak with a flamboyant manner that continued to stir the pot. Naomi Phillips was great as Annabel for the short time before her “death”; Caroline Blom Brown was hilarious as the splay legged mother in law; Bev Benham’s landlady, Mrs Stewart-Dubonnet was a suitably nosy neighbour, while Sally Ransom’s Isabel did a great job as a fey friend. Finally, Terry Cramphorn’s brief appearance as the Inspector was also well done. I hope he isn’t drowned by the end of the week.

Congratulations also to the set designer and props team for creating a very authentic Cosy Nook and to the sound engineer for their choice of music.