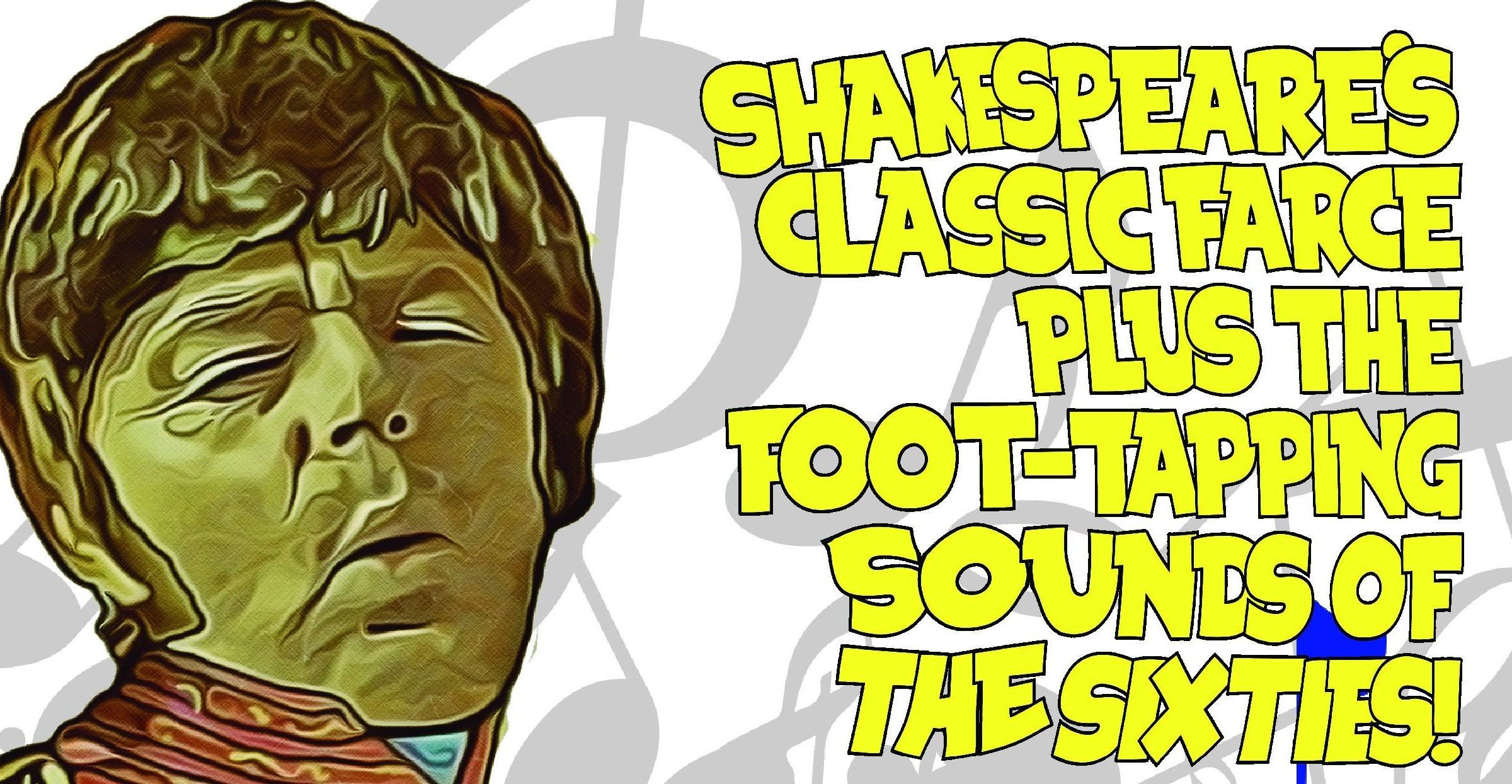 The Merry Wives Of Windsor | by William Shakespeare 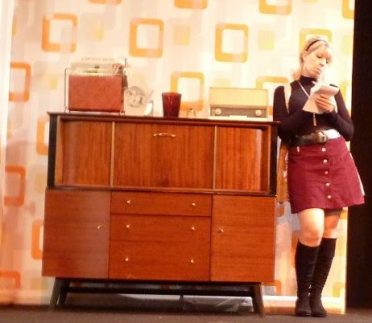 This is what happens when The Bard comes face-to-face with classic 1960’s pop and the famous British “Whitehall” farces. Shakespeare’s funniest comedy gets a jukebox musical makeover. Falstaff fancies himself as a ladies’ man. But the Merry Wives of Windsor are already plotting their revenge on the greasy knight. Set to foot-tapping sounds of classic pop and soul, this is Will Shakespeare as you’ve never heard him before. It’s the most fun you and your family will have this Christmas.

Father and daughter directorial duo Peter and Anna Jeary took the perhaps lesser performed Shakespeare comedy (although with some of the most memorable characters and names) and swung it into the sixties in this ‘slimline’ musical jukebox adaptation. Vastly patterned wallpaper, a lovesick girl in a trippy technicolour mini-dress and a lad in a leather jacket with coiffed hair opening the scene set us up for a light-hearted, bawdy romp to carry us through the evening.

The set was era specific – sliding glass door drinks cabinets with pull down cupboards and a beaded curtain masking an exit, but I found the number of entrances a little confusing. I couldn’t place the set of each scene, nor decide which door led to where, but the many entrances did prove handy in enhancing comedic moments when attempting to conceal Falstaff or unexpected visitors, as was often happening.  Lighting was designed and operated well by Roger Mannion. The focal character of Merry Wives and appearing in no less than three other Shakespeare plays is the obnoxious and lecherous Falstaff, performed by stage veteran Dave Hawkes with aplomb.  Outrageous costumes (all characters were well turned out, and provided by Bernice Cramphorn, the director and cast) suited his grotesque character, including a particularly fetching luminous green Sergeant Pepper costume.  Every euphemism was played for a visual gag with great delivery to receive maximum laughs. Songs were belted out with gusto and passion, even if the passion was not reciprocated by his love interests (or victims). The immaculately presented and feisty Mrs Ford was played by Nikita Eve, who was the image of a perfect wife, (if with a hint of a wandering eye) topped with a beehive, leopard print mini-dress and balanced on high heels.  Her singing performance was particularly strong; certainly well matched in ability during the duet with the other ‘Merry Wife’ Mrs Page played by Rachel Curren in their performance of Aretha Franklin’s Respect.  Mrs Ford was well matched with her mistrustful Mr Ford played with conviction by Tom Tull.  His double act as Mr Brook led to a delectably ridiculous disguise, in a scheme to undo his wife whilst in cahoots with the unknowing Falstaff.  His powerful rendition of Delilah, closing the first half, required no microphone – his vocal ability carried him through and beyond the modest auditorium.  Sarah Bell played the dry-humoured and brazen Mrs. Quickly, who acquired the position of cleaner and housekeeper.  Appearing to orchestrate the action on-stage, complete with fag hanging from her lip whilst completing her chores, she provided the reflective class difference and a reassured performance with ease.

Mr and Mrs Page played by Simon Hirst and Rachel Curren made a sound, reassuring couple, believable in their on-stage marriage sharing their concern and interference in marrying off their daughter Anne Page, played by the fresh-faced Charlotte Norburn.  Having already set her sights on her leather jacket-clad rebel Fenton, played by James Fletcher, she appeared less than impressed with her suitors presented to her.  Given the choice of Slender, a slightly slack-jawed Brummie complete with hang-dog expression, played for laughs by Alexander Bloom, or Doctor Caius, the Frenchest man I have seen perform since the cast of ‘Ello ‘Ello, topped with beret and cigarette holder, played by Bruce Thomson, I know who I would have chosen given the circumstances too. I did lose some of the dialogue from Slender – I imagine it is a challenge to tackle complex Shakespeare prose with a thick Brummie accent – yet he held his character well.  Doctor Caius was a riot – a chaotic, typically enraged flamboyant scene stealer of a character. Parson Evans played by David Johnson provided a voice of reason amidst the larger character performances, as did Jacquie Newman taking the servant position, and ably singing with the ensemble pieces to make them more harmonised numbers.  It took a song or two to pick up the rhythm of the production – a microphone on a stand was provided each side of the stage for characters to use when necessary – but the theme of the scene and songs were blended together nicely, with some top quality live music enhanced with live looping (thanks to the useful programme notes) provided by the single musician Nick Mayes, assisted by sound technician Keith Newman.  The guitar could possibly have been made more visible to the audience as part of the overall performance.  It would also have been a nice addition to have song credits printed with the performer’s names in the programme. The background images within the programme also came out maybe a little darker than expected.

The directors played the production for plenty of laughs, ensuring Shakespeare is accessible to be enjoyed by all, and kept to his original intentions of good humour and farcical comedy.     Overall, I felt all performers were at ease in their roles and with each-other. Characters  and relationships were well developed, with some wonderful clashes and laugh-out-loud moments – one that sticks in mind is the final scene in the forest with Falstaff to the music of timeless Jonny Cash, and also the usually drawn out ‘big reveal’ condensed into a simple re-enactment with Bert Kaempfert’s Swinging Safari as the backing music. I certainly left the auditorium with that tune in my head all night. 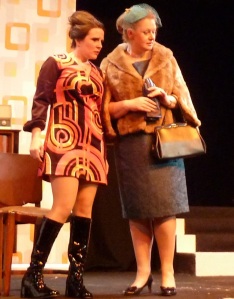 Shakespeare’s problem comedy – a star vehicle for the fat rascal – seems to cry out for music; there’s a long roster of adaptations from Salieri to Sullivan, Verdi to Vaughan Williams. And only a few years ago the RSC did a musical version, not too successfully.

Peter Jeary’s take is a very different kettle of pickle herring. A jukebox musical, with songs of the sixties to provide interludes and insights into plot and character.

The idea was prompted by the Whitehall farce, a genre both apposite and ripe for parody.

It all works disgracefully well, despite some challenges in the execution. Not hard to imagine this being suggested for a professional company of actor/musicians.

CTW fields a strong cast, who generally cope well with the sometimes conflicting demands of Shakespeare and the Sixties songbook.

Stock characters, many of them, from David Johnson’s Robertson Hare vicar to Bruce Thomson’s hilarious Gallic Caius. Sarah Bell – a char with hoover and drooping ciggie – is a fine Mistress Quickly. A lovely, dense Slender – parka and Brummagem – from Alexander Bloom; the young lovers are Charlotte Norburn and James Fletcher. But it’s old lust rather than young love centre stage here, with Dave Hawkes’ lubricious Falstaff, sporting some outrageous 60s military clobber, clumsily courting the two married ladies of the title. They are excellently done by Nikita Eve and Rachel Curran. Musically secure, with a real chemistry between them, they are particularly successful in letting Shakespeare speak, and making sure the Bard gets the laughs he’s written. Their husbands are Simon Hirst, giving a nice period performance as Page, and Tom Tull as the jealous Ford, making the most of his numbers, including a powerful Delilah.

Some songs work better than others. Ring of Fire fits perfectly for the fancy-dress fairies in the forest finale, with “marvellous night for a moondance” to set the scene. An ironic Look of Love opens the second half, Presley’s Suspicion is ingeniously staged, with three smoking lovers seducing Ford’s wife behind his back. And was that Wimoweh for the wives’ “confession” in dumb-show – brilliant!

The music – all of it live – is done by Nick Mayes – who also plays Slender’s servant Peter Simple. Some issues with balance between backing and vocals, and between dialogue and songs, meant that the unplugged pieces worked rather better in the context of the play.

The costumes and the set both very evocative of the period, though the set – split by a strange black hole in the centre – finds it hard to melt into the background.

Despite some dumbing down and desperate double entendres, this is a very enjoyable take on Shakespeare, all done in two hours. By the sing-along Everlasting Love line-up the audience will include some new converts to CTW and, we hope, to Shakespearean comedy.

This was a musical twist on the Bard’s original work. Following on from Henry IV  – it repeats the character Falstaff but in a new tale of lust, revenge and comical farce.  This production combines the original work but set in the sixties with interludes of relevant musical numbers.

This cast made the most of this production  – I love it when Shakespeare is given a modern twist as it makes it much more accessible to people who wouldn’t normally enjoy his work and this production embraced this.

The Merry Wives were played exceptionally well by Nikita Eve as Mrs Ford and Rachel Curren as Mrs Page. Both ladies commanded the stage well and Nikita, in particular, proved to have an amazing singing voice to boot.

Dave Hawkes as Falstaff was suitably sexually charged and strutted around with the prowess of a sex god – he delivered some great songs although at times I felt his diction could have been slightly better to ensure we hear what he was saying.

Diction on occasions was an issue as it was occasionally rushed which made it difficult to understand, Tom Tull as Mr Ford had a real Ray Winston feel about the character but also sang with great emotion.  Sarah Bell as Mrs Quickly was delightful as the intermediary in leopard skin. I loved her interpretation and she looked as if she had walked straight out of the 60’s.

In fact, the attention to detail of the costumes was brilliant.  I loved the costumes – all the sixties fabrics – I felt Jacqui Newman summed up the era completely in her costumes as she looked amazing.

James Fletcher as Fenton was perfectly cast as the young lover and showed his skills as a performer and dancer in the numbers he was involved in.  Alexander Bloom was hugely enjoyable with his Brummy accent as Slender.

As a whole performance, this was a fun and enjoyable take on Shakespeare and if you ever thought that Shakespeare isn’t your thing then this production will give you an insight into his work with lots of great musical numbers included.