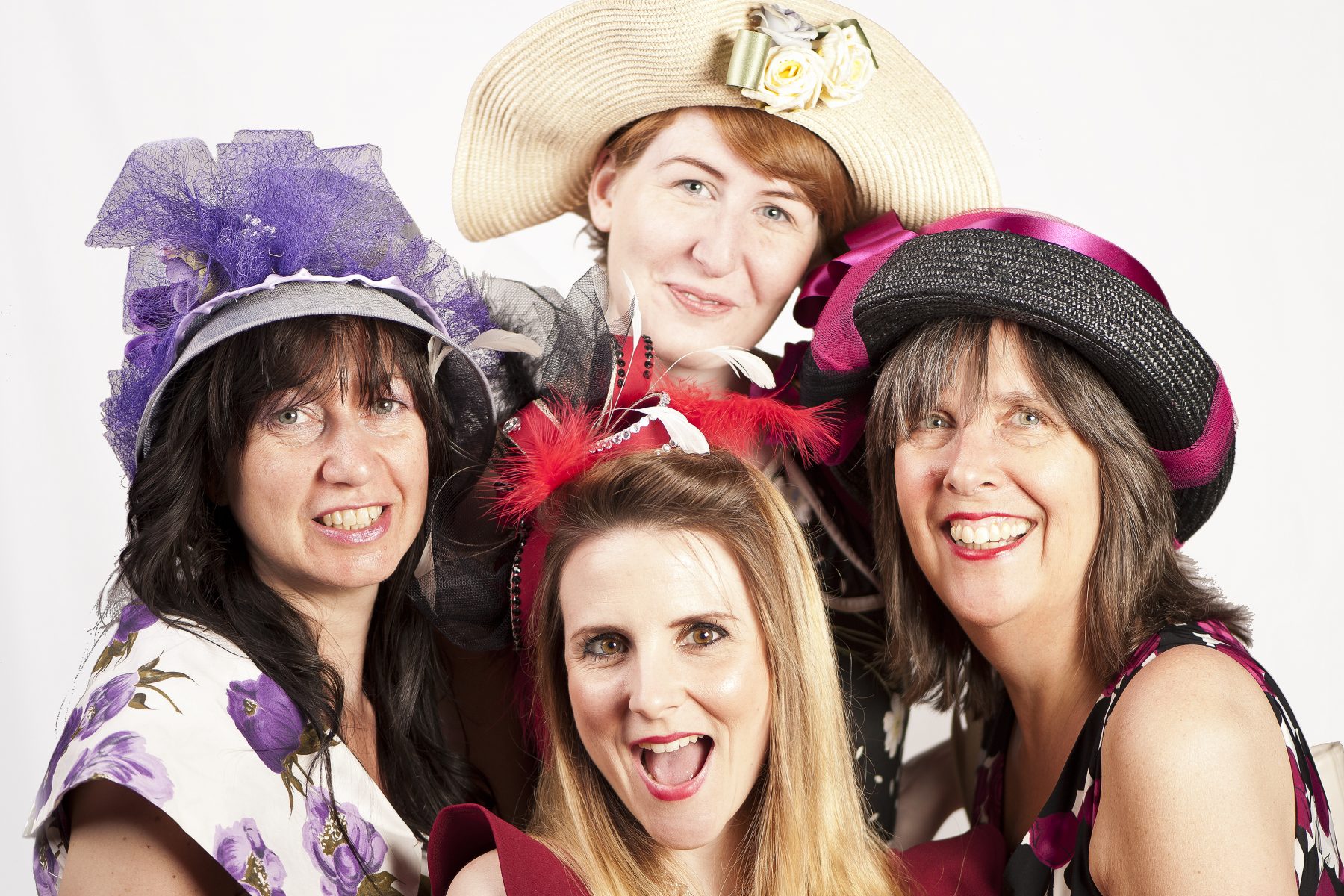 Ladies’ Day at Royal Ascot! It conjures images the world over of glamour, culture and sporting excitement, but now four fish packers from Hull have decided they want in on the action. Unfortunately, they haven’t got any tickets, but they won’t let a little thing like that stand in their way. Join Pearl, Jan, Linda and Shelley in this hilarious comedy from Amanda Whittington in their quest to find love, happiness and Tony Christie.

And they’re off!  The overalls and wellies that is, in a sharply choreographed and well executed dance routine to Tony Christie’s ‘Is This The Way To Amarillo?’ midway through the first act of Chelmsford Theatre Workshop’s latest production, Ladies Day by Amanda Whittington.  The four female friends at the heart of the story throw off their white fish packing work uniforms to reveal glamorous dresses befitting their characters so they are all set for a day at the races.  In visual terms, the scene was reminiscent of a regendered version of the ‘Hot Stuff’ sequence in The Full Monty.  This was not the only thing this production had in common with that example of classic British comedy.

Originally written for the Hull Truck Theatre Company when the Royal Ascot race meeting was held in York in 2005, Ladies Day follows the four women on a much needed chance to dress up and enjoy a day out.  For all of them, it turns into a day that will change their lives forever.

Inspired casting by Director, Christine Adams-Davidson really helps to lift these characters off the page as their heart-felt but all too familiar back stories are revealed over the course of the events of the day.  Nikita Eve-Mansfield, in particular, shines as the fame and man hungry Shelley and Jane Smith puts in a commendable performance as Pearl, the all-too recognisable everywoman with the surprising and ultimately heart-breaking secret.  The selfless and careworn Jan is played competently and sympathetically by Sarah Bell and Laura Burton is suitably entrancing as Linda’s quiet charm is given a memorable chance to come to the fore.

With a female Director and central cast members, this production is a true Ladies Day for CTW.  Credit, however, is also due to the two male players who each portray several supporting but vital roles.  Colin Smith is particularly convincing as Jim McCormack, the brash, smarmy and recognisable TV racing presenter who ends up shattering Shelley’s illusions.  Smith is transformed but similarly believable as Patrick, the lonely jockey and owns the stage in an exhilarating set piece which borders on the erotic and helps us see a different side of one of the four.  Steve Holding-Sutton brings more than a tear to the eye as Barry, sharing one tender and poignant last dance with Pearl.

Throughout the play, lighting, together with a simple backdrop and carefully chosen props (complete with cleverly disguised in joke!)  combine to transform the stage from the clinical dreariness of the fish packing factory to the leafy, sunlit decadence of the racecourse and back again.  Strategic stage movement by the actors, too, adds to the impression that our heroines really are at the races within the confines of the set.

Despite the well observed references to the north/south and class divides as well as the lure of celebrity culture in 21st century Britain, the main message which emerges is the value of friendship to ordinary people as they traverse the highs and lows of life.  It is a simple but uplifting message. The foyer is bedecked with union flags as you enter and cheesy 80’s classics play over the sound system. As an enjoyable night out on a British summer’s evening, Ladies Day certainly is a safe bet!

Set to the soundtrack of Tony Christie’s music this wonderful play was an absolute treat tonight.

The four ladies and two gentlemen who made up this production were all equally well cast and gave us a truly fabulous insight into their lives and loves.  Director Christine Davidson has been gifted with a wonderful cast for our four female leads who brought the story to life with such strong performances.  Each of the characters had a hidden agenda but it was the beauty in the performances that really allowed the individualities to shine and at the same time work wonderfully as an ensemble leaving us really believing the realism of the story which tells of 4 ladies who work in a Hull fish packing plant going to Ladies Day at Ascot (the year it takes place in York) and the stories behind their everyday mundane lives.

With Chelmsford Theatre Workshop, I am always impressed with their stage and set dressing and this was no exception, I especially liked the innovation where they did a costume change from fish packer to Ascot glamour through a dance routine to Tony Christie’s Amarillo and their hat and shoes were hidden in the cold ice boxes.

Pearl, who is the most level-headed of the group and despite her many years married, finally reveals her secret affair in the Station Hotel for the past few years with Barry, a bookie who travels the country and with whom she hopes to reignite that flame at the races. Played by Jane Smith, this was a deep and emotional performance showing all the light and shade of a woman torn by what didn’t happen and how to come to terms with what might have been. I really enjoyed Janes portrayal as I felt it was very true and honest.

Jan is a mother who lives for her daughters Clare’s achievements after her husband left many years ago and we subsequently learn she has secret feelings for Joe, in the factory.  Sarah Bell quietly crafted Jan the worrier and one of the highlights of the evening was her drunk performance which had great comedy timing and pathos.

Shelley is a brassy, sassy girl who likes to use her feminine charms to their full extent and find herself a millionaire or her fast track to stardom. Nikita Eve-Mansfield fell beautifully into this role. She used her sexuality perfectly and gave us a WAG wannabe with heart.

Mousey Linda has a mother, who likes to take advantage of her at will and who found comfort both in the music of Tony Christie and in a friendly interlude with one of the hungry jockeys. Laura Bradley was equally awkward and charming in this role and her scene with Colin Smith in one of his many roles as Patrick the Jockey was one of the loveliest moments in the play.  Colin was equally well cast as Jim the bookie and Kevin the Drunk.  The final cast member was Steve Holding-Sutton as Joe from the Fish Factory, Barry – Pearls’ lost love and Fred the ticket tout.

The theme of togetherness and friendship was highlighted successfully not only in the direction but the performances of the cast. I really enjoyed this evening and did, in fact, leave wondering what happens next in the story as I was so captivated with the show and the performances.   Get yourself a ticket and get down to The Old Court Theatre, Chelmsford to see this great production now – its certainly worth it.

Ladies Day by Amanda Whittington tells the story of four ladies from Hull, working in a fish packing factory and their journey to Ladies Day and what it means for them.

There was an excited buzz as the lights went down at the Old Court Theatre in Chelmsford. The stage was set as the factory and the four ladies took to the stage dressed in their work uniforms. As the scene progresses, we learn a little about each of the characters very quickly. As they agree to go to Ladies Day to celebrate Pearl leaving the job (not retiring!) they ease into a brilliant costume change dance routine to ‘Is this the way to Amarillo?’. What a great transformation from the clinical work uniforms to the glamourous Ladies Day outfits!

As the story advances, we discover a lot more about each of the ladies. Pearl, played by Jane Smith is a woman with a secret that she’s been harbouring for seven years! Jane gives us a range of emotions and we see the struggle that she’s been facing. A strong character, with a really genuine honest portrayal and some really tender moments.

Sarah Bell plays Jan perfectly. She has great comic timing, and is particularly good as a drunk! Sarah has really ‘got’ the accent and delivers her lines naturally. You can really see how much Jan relies on Clare and why she holds back her feelings for Joe throughout, Sarah gives Jan a lot of depth. A fantastic performance! ‘What did y’have for tea last night?’

Linda, played by Laura Bradley is a naïve and vulnerable young lady. Laura embraced this role and was very natural throughout the performance. One of my favourite scenes was with her and Patrick in the jockey’s rest area and seeing their connection. Throughout the show Linda grows in confidence, and Laura really takes us on this journey with her.

Shelley, the wanna-be wife of a millionaire, played by Nikita Eve-Mansfield is the fiery, brash and sassy character of the story. Nikita delivered all of the characteristics we would expect and more; but we also saw the vulnerable side to her and underneath the bravado what she was actually going through. A tough role to perform, but Nikita did it with ease.

Steve Holding-Sutton as Joe, Barry and Fred had a challenging job portraying these three characters. As Joe, he is the kind boss in the fish factory, holding back his feelings for Jan – just as she does for him and giving Pearl the chance to follow her dream, just as he plans to with his move to Australia. And as Barry, the secret lover of Pearl, he gives a touching performance as we discover his fate and see their last dance.

Colin Smith had the difficult task of playing three very different roles in this performance but managed it very well. Playing Jim as the sleazy tv presenter, trying to take advantage of Shelley; followed by Patrick the jockey where we saw a change in accent and character as he became the soft, lonely man to connect with Linda with some lovely moments between the two; and finally Kevin the drunk who’d lost everything! Three accents, three costumes and three very different characters – well done Colin!

Sound and lighting were appropriate for the performance and really helped to focus our attention and enhance the feel of the scenes from the somewhat dreary mundane fish factory to the sunshine at the racecourse. The racecourse back cloth was brilliant, a really clear picture, transporting us straight to the races. The costumes all worked really well for the characters and looked perfect for Ladies Day!

A really fantastic story, and great performances from the whole cast. The direction was spot on, ensuring that we got to know each of the characters as the story progressed. A real feel good production. Congratulations Christine, Iain and the whole team!